After making quite a few castings using just a large propane torch and a pile of fire bricks I thought it was time to make a proper furnace. The torch and fire bricks works ok, but is a pain to set up and wastes a lot of expensive gas.
I looked around for a suitable sized steel dustbin ( trash can)  but couldn't find one suitable at the time, so decided to roll my own.

This is how my furnace was made.

I bought a small sheet of 0.5mm steel from the local DIY store and some 25mm x 25mm steel box section. The sheet steel was cut to size and rolled to form the body and the box section added to form the legs. One of the legs is longer than the others and extends to the top of the furnace.
50mm x  6mm galv screws and nuts were used to join the ends of the sheet together, passing the screws through the long leg and into the steel casing. There were left full length on the inside as this will help hold the refactory in place.
A hole was made for the tuyere and a disc of MDF cut to be a snug fit on the inside of the casing. Two further pieces of MDF were cut and holes made in them to suit the outside diameter of the casing. These 2 formers were placed as shown below to keep the casing in shape when the refactory is added. The disc has a sheet of plastic laid on top to prevent the refactory sticking to it. 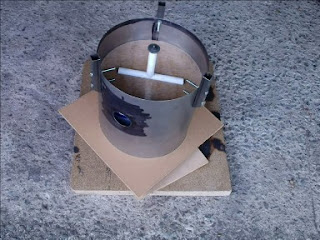 The disc in the photo is resting on top of some wooden packing equal to the height of the plastic paint can which will be used for the inside former, less the thickness of the disc. The 20mm dia white plastic tube you can see was to form a trough and escape hole for any metal spills but this has proved to be too small.

Update 22/07/14
If I were to make another furnace I would not bother with the drain hole but add another inlet in the side for a blower. See the details of my blower at the bottom of the page. This has speeded up melt time as well as using less gas.
. 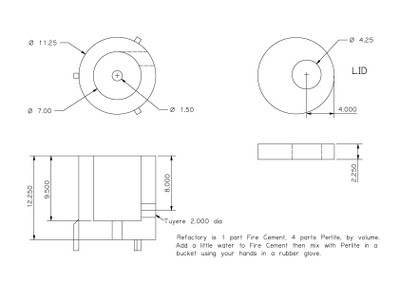 The Refactory.
From a garden center I bought a 100Lt bag of  Perlite and from a stove center, two 12.5 Kg tubs of Fire Cement. After the job was finished I had half a bag of the perlite and about 1/4 tub of fire cement left.

The mix is 4 parts of Perlte to 1 part Fire Cement by volume. It is not that easy to mix so and I found the best way was to add a little water to the fire cement and mix in a bucket using your hands ( wear rubber gloves). Any water added has to be evaporated before the furnace can be used so as little as possible was used but enough to make the mix workable. 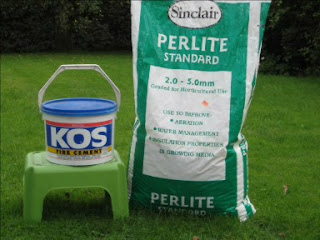 At the bottom, some galvanised steel wire was tied between the protruding screws inside the casing to help key the refactory to the furnace, like the reinforcing bars that are used that in concrete. 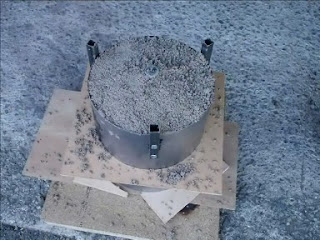 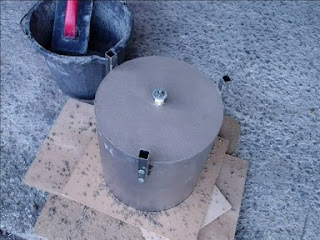 This now has to be left to dry. It could take a few days depending on the air temperature in your part of the world. When it was dry enough to handle it was turned over and the disc removed.


For the inside former I used 5Lt + 10% extra free, plastic paint can. A further piece of the metal sheet was bent and added to the outside to make a bracket which will later hold the burner. A tube of silicone was used as the former for the tuyere. The screws were again left long on the inside of the casing. 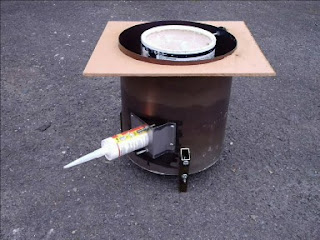 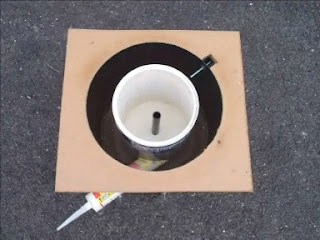 Another mix of refactory was then added around the former .This was then left to dry naturally for a few days until I felt the former could be removed. Once it was removed a 60 watt light bulb was suspended inside to speed up the drying process. Next I dried it further by putting it inside the kitchen oven. It just fitted. Since the furnace was made we have had a new oven and I don't think my wife would let me do this with the new one!
You can see in the photo below I also added a ring and rods to give extra support to the bottom. 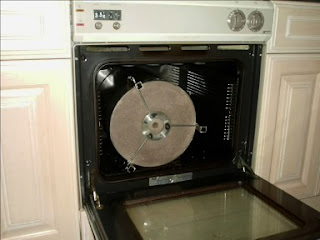 The lid was made in the same way as described to the dimensions shown in the drawing.

The Burner
I already had a Sievert propane torch set which has an economy setting, the main flame can be shut off and a smaller flame kept going. I made a new necktube to fit it using a jet from one of the nozzles I had. It is not essential  to use a torch handle, a simple gas tap would do the job. I use an adjustable regulator set at 2 Bar (28psi) and this incorporates a hose protection valve which cuts off the gas if the hose should fail. 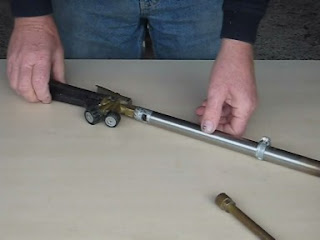 A hose clip determines the length of tube that goes inside the furnace. 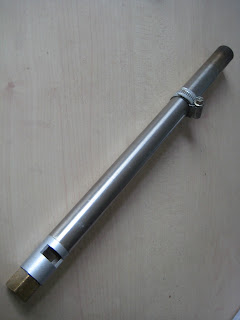 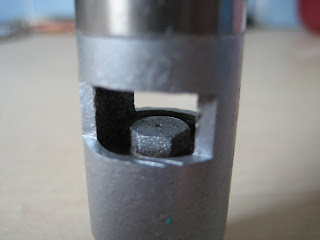 Close up of the jet. 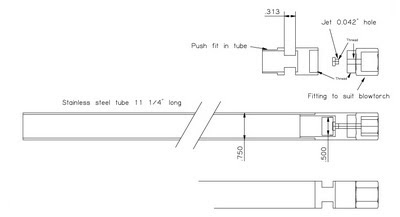 To hold the burner in place the bracket shown below was added, the holes are a loose fit on the burner tube. The burner tube is not sealed into the large hole in the furnace (this is called the Tuyere) This allows air to be admitted around the burner. 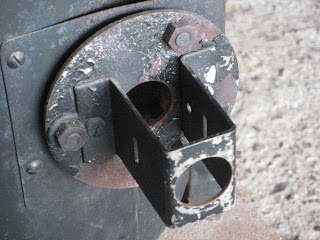 The furnace was heated up slowly several times to prevent cracks before being put into service. 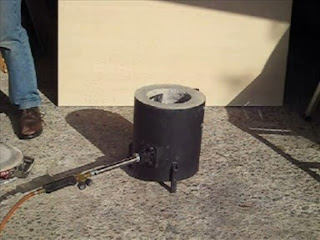 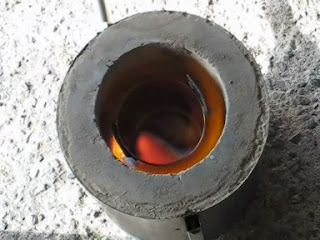 The Kasenit Furnace
If you are following my metalcasting videos you may have spotted I am using a different furnace in  Part 29
This is a commercial furnace that was recently given to me. It was in a rusty condition but a clean up an a coat of heatproof black paint smartened it up. It was originally made for town gas but the previous owner had changed the jet and it now runs on propane.
By coincidence the internal dimensions are identical to my home made one.
I was interested to see how it's performed compared.
The main difference in the design is the vertical air inlet to the right of the burner, and the design of the burner itself which screws into the side. There is no hole in the bottom. 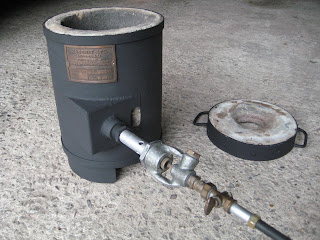 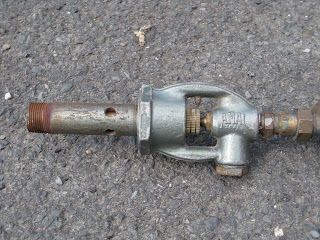 Well I have to report there is no noticeable difference in performance. I have not measured the gas consumption of the home built furnace but I have recorded it for this one.
I was surprised how little I used. I weighed the gas bottle before and after the melt and found 0.3 Kg had been used. From this I got 3.88 Kg of metal after the dross had been removed.

The advantage of the Kasenit furnace is that the refectory will be good for melting brass and bronze if I ever need to. The homemade one with the perlite lining is not designed for the increased temperature though ideal for aluminium melting.

For a year or so I have been using a clay/graphite crucible in place of the home made stainless steel ones. The reason for the change is the stainless steel storage containers don't seem so easy to get now and they are thinner. This meant I could only get about 3 melts from one before it sprung a leak.
As expected the time taken to melt the metal is now longer. With a stainless crucible the heat from the burner is transfered  easily through the metal but with the graphite one the whole furnace needs to brought up to temperature.
I have been using the burner supplied with the Kasenit furnace without any thought but one day I had my hot air gun handy during a melt and blew some air into the vertical slot next to the burner. It seemed to make the burn more fierce but it did not reduce the melt time.
Then I thought I would try my home made burner with the blower and it was a big improvement. 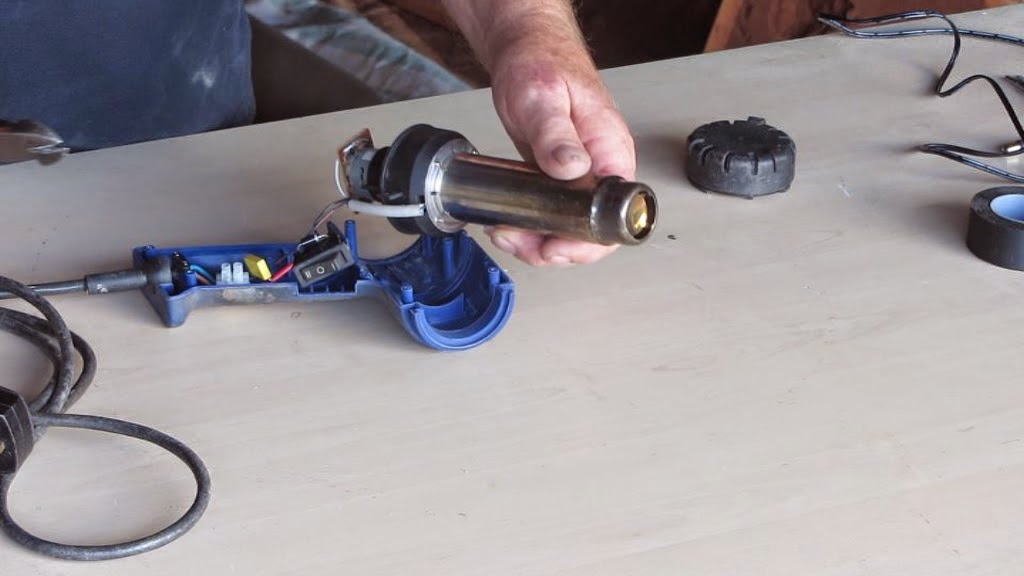 The blower was taken from a hot air gun

How the blower was made 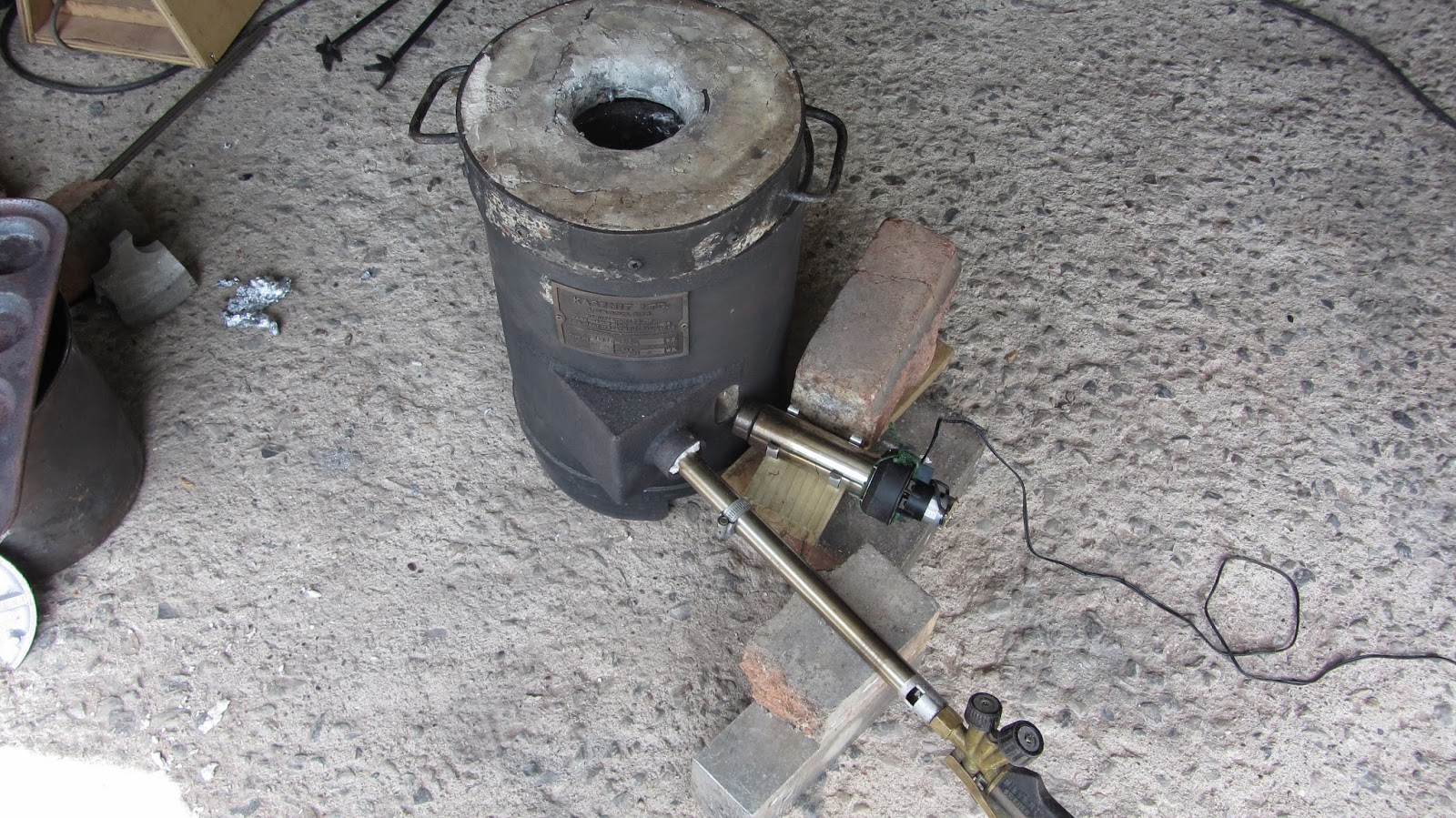 Temporary set up to evaluate blower 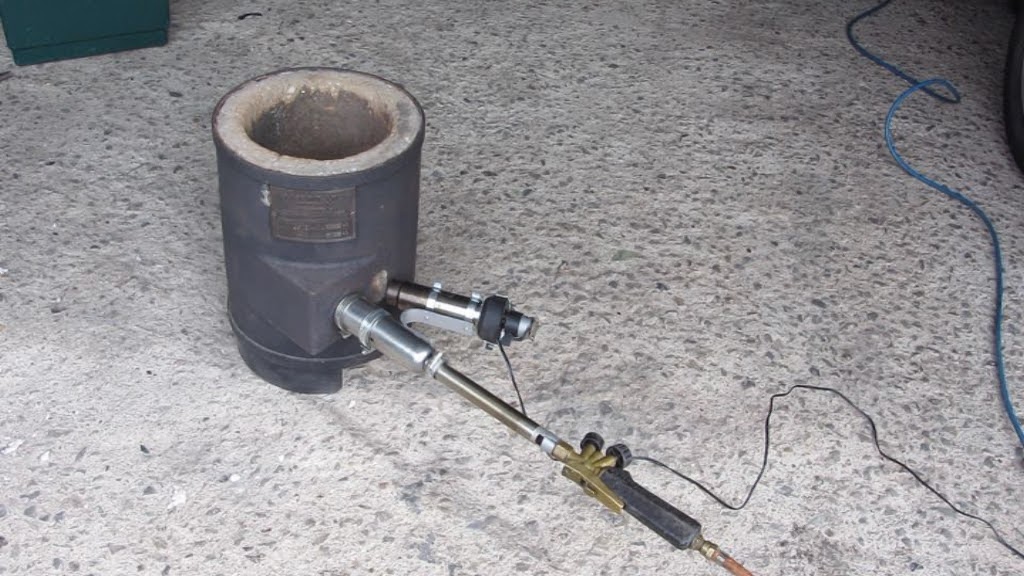 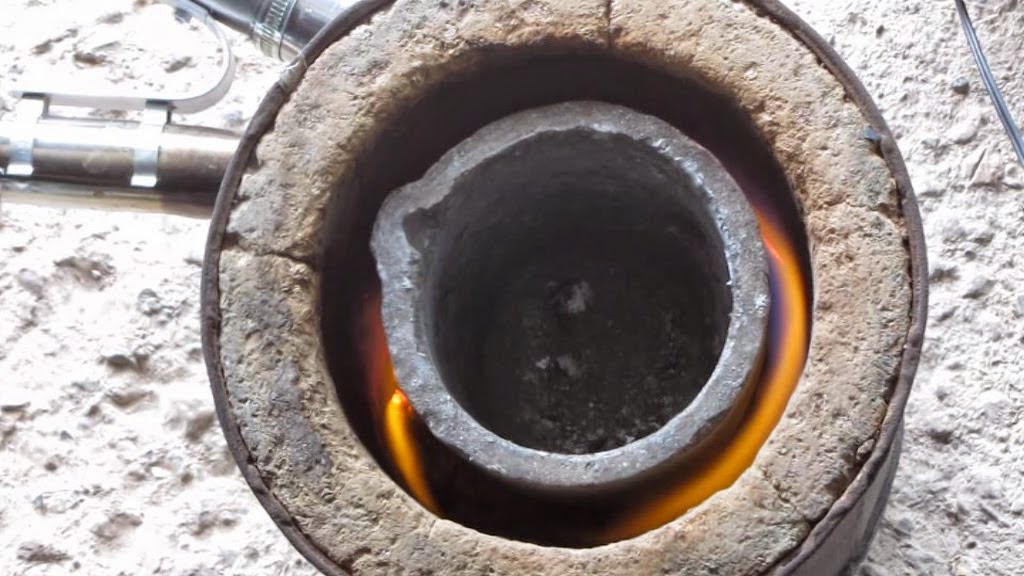 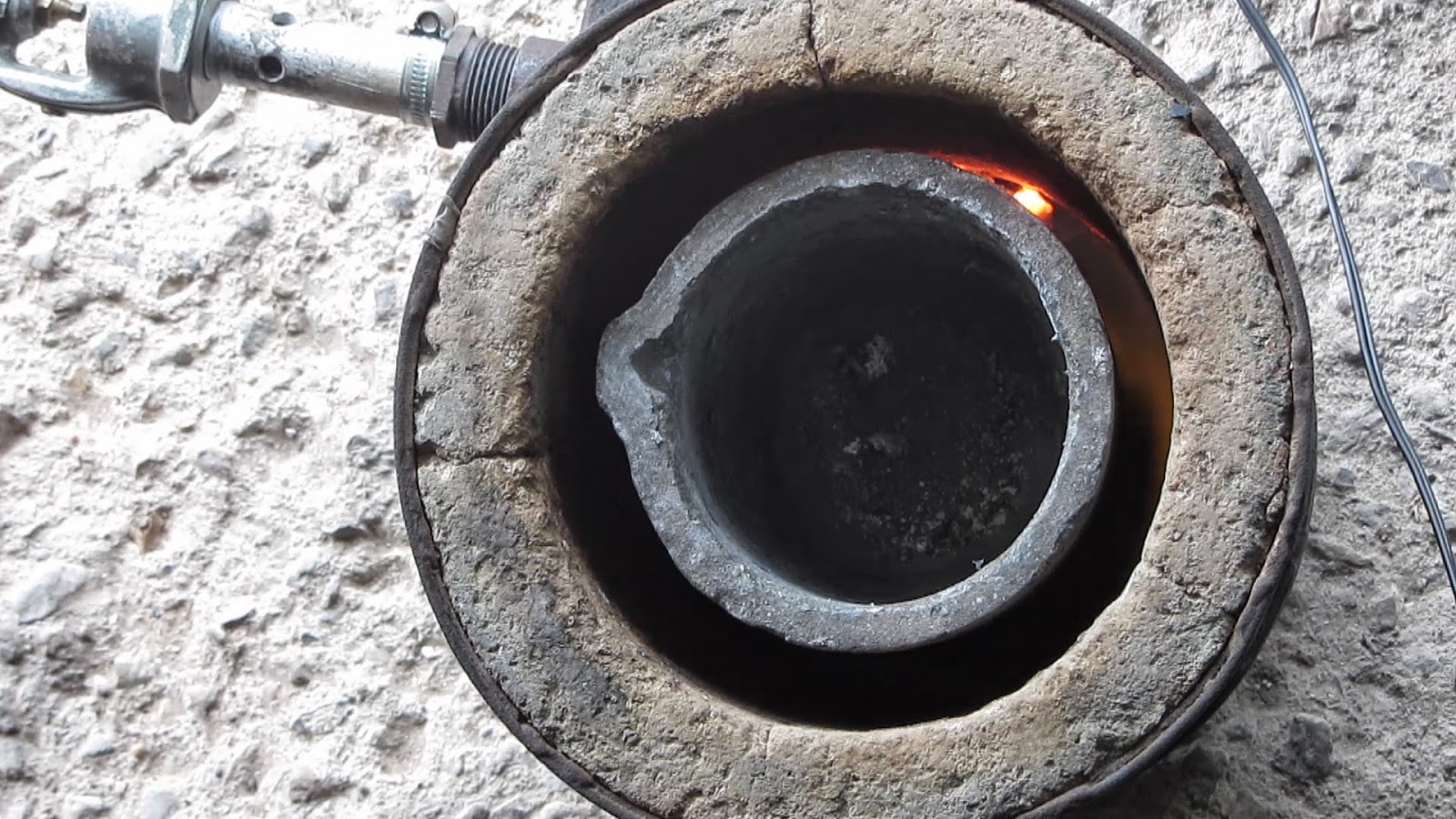 This is the Amal burner on the same pressure setting, 2 Bar

16/08/14
New burner design.
I have simplified the burner design to use plumbing fittings and no jet is now needed. Easily made in a hour or less.


The video above shows the construction.
Here are the dimensions:
15mm copper tube 80mm long
20mm steel conduit 225mm long
Hole for the gas jet is 1mm dia.
I tried the burner with  the 20mm steel tube and also a 22mm stainless tube.
Both worked equally well, I used the 22mm one in the end as it fits the hole already in the furnace.

Check out my other pages on furnace and burner building 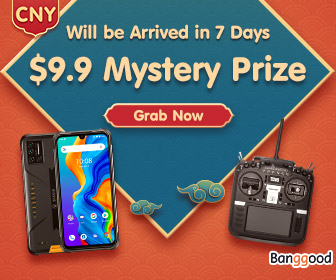 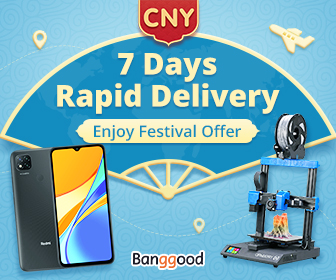 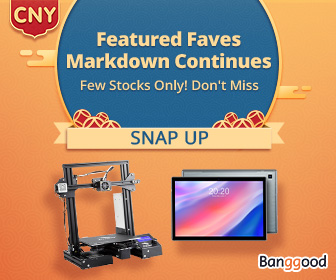